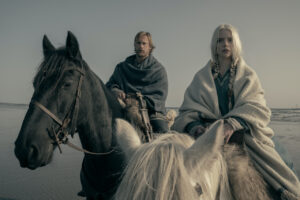 Hell hath no fury like a Nordic prince wronged. That’s the premise of this 10th century Scandinavian revenge allegory. Deceit, murder and vengeance rain down in torrents.  Once upon a time, King Rørik of Denmark appointed two brothers, Horwedil and Fengo, as the rulers of the peninsula of Jutland. Horwedil slayed the King of Norway, he […]

(***) If bed swapping was a sport, these French twentysomethings would be Olympic-caliber athletes.  Millennials have infested Paris’13th arrondissement district. They walk down streets, chatting and philosophizing. It’s enough to make you wonder who they are, what they do and where they’re going. If your eyes focus on Émilie (Lucie Zhang), Camille (Makita Samba) and […]

(**) She’s yanked, pushed and pulled. To here, there, everywhere. To times and places she couldn’t imagine.  The very drably attired Evelyn Wang (Michelle Yeoh) owns and operates a laundromat with her nerdy looking husband Waymond (Ke Huy Quan, Indiana Jones and the Temple of Doom). At least she thought he was her spouse. He may be […]

(**) Marcus and Drew are like Cain and Abel. Two brothers both loving and jealous. In the bible, only Cain survived. Should one of them be worried?  Producer (Sons of Anarchy), writer (Luke Cage), director (Things Never Said) Charles Murray’s home turf is television. The limitations of his small screen producing, writing and directing style may become […]

(**1/2) “Before you leave, teach someone to drive.” That advice from a former boss at an auto shop best expresses blues legend Buddy Guy’s destiny. This is not the definitive Buddy Guy bio/doc. That distinction goes to Buddy Guy: The Blues Chase the Blues Away, which appeared on PBS in 2021. This nonfiction film has a different mission. […]

(**1/2) It’s kinda like a movie. Kinda like a sitcom. Not really either. But its sweet emotions and modern sensibilities eventually make it endearing.  It looks like the goal of the relaunch of Cheaper by the Dozen, a classic 1950 and 2003 white bread Disney family comedy, was to make it more topical and multi-grain. Certainly, […]

By Dwight Brown NNPA Entertainment Writer It’s back in Miami. After a COVID hiatus, the lights shined bright at the Hard Rock Stadium in Miami Gardens, Florida. Singers and musicians rocked the stage and fans danced like it was a block party at the 2022 Jazz in the Gardens Music Festival. Though the event takes place at […]

(**) He didn’t come back from the dead. He came from another time and place. 2050. Back to see his younger self in what’s called a “parallel contact.”  That’s the foundation for this generic act/adv/com/sci-fi/fan. It starts with a good idea, then works the very primal emotions of a family in distress and an adult […]

(***) Sometimes a modicum of dialogue works best. That’s seems to be a basic strategy for Austrian writer/director Sebastian Meise and co-writer Thomas Reider. Show first. Tell second.  The two filmmakers created this perceptive ode to the downtrodden with special care. They set up the premise: persecution of gays post WWII. Picked a worthy protagonist: […]

(***1/2) Crime is rampant in Gotham City. Murders. Manslaughter. Blood soaks the streets. Citizens live in terror and the police are stumped. On desperate nights a Batman signal lights up the sky and the caped man jumps into action, but even he can’t stem the tide: “It’s a big city. I can’t be everywhere.”  The […]