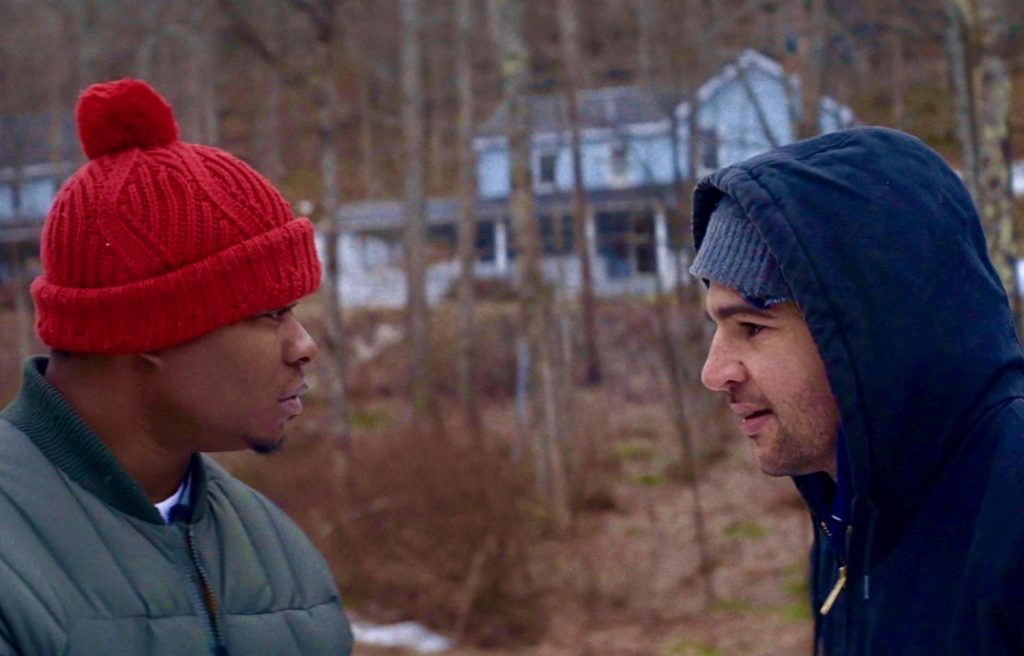 It’s a situation nearly every black man has experienced at some point in his life: Being the only African American in a room, party, meeting… It can be both an alienating and insular experience all at one time. Jordan Peele captured the essence of that feeling and monetized it, winning countless awards and raking in millions of dollars with his horror/thriller Get Out. Chilean writer/director Sebastián Silva (Magic Magic, Nasty Baby, The Maid) is equally deft at setting up the same eerie premise, but woefully lacking with the follow through.

The script creates a black protagonist, Tyler (Jason Mitchell, Straight Outta Compton), who is friends with a white dude, Johnny (Christopher Abbott). Nothing seems abnormal about their ebony/ivory relationship and the two seem to have a believable bond that should stand the strain of odd situations.

It is with a complete sense of safety and innocence that one wintry day brotherman accepts an invite for a trip up to the Catskills with his friend. How was he to know that their car would run out of gas on a quiet road? How was he to know that the trip would be an exclusive gathering of young white men whose collective bromance does not relate to him or his cultural norms? As Johnny’s crew gathers at his buddy Nico’s (Nicolas Arze) isolated cabin, the abode gets flooded with more and more guys.

The beer flows like the mighty Mississippi. More grass is smoked in minutes than days at Snoop Dogg’s house. The guys chat, gab and share anecdotes. They say things that demonstrate that they haven’t been around lots of black people. Tyler feels uncomfortable and estranged—to the point that brotherman wants to escape.

Mitchell’s interpretation of his character’s viewpoint and paranoia builds to an unsubstantiated fear that snowballs out of control. He doesn’t have to do much to make you feel the weirdness he experiences. His gestures and looks are quite effective. The ensemble of twentysomething and thirtysomething men well contributes to a believable frat-house camaraderie that makes it look like they are living off the fumes of their youth, though they are not kids anymore.

The more curious plot shift and odd triad dynamic involves Tyler fleeing to the home of some neighbors. They’re a couple that includes a slightly nosy and ultraliberal white wife (Ann Dowd, Hereditary) and her somewhat suspicious black husband (the late Reg E. Cathey, House of Cards). She fawns over Tyler, and her spouse asks him a hell of a lot of probing questions.

It’s a pity the film doesn’t amount to more than the sum of its parts. It’s almost a waste of Heidi Bivens (Spring Breakers) very subtle and natural costume design, David Cherof’s perfect-palette art direction and Alexis Zabe’s (The Florida Project) intuitive cinematography that helps set the time and place without getting in the way.

Sometimes a film’s short running time (86 minutes) feels like it is miraculous because the editors (Jennifer Lame and Sofia Subercaseaux) must have whittled down a massive amount of footage into a succinct final version. In this case however, it seems like the editors should get credit for fluffing up a series of dull sequences into a head-scratching but cohesive movie.

Back to filmmaker Sebastian Silva: If this film has a far-reaching purpose, he’s keeping that raison d’etre to himself. Tyler gets shoved out on a limb, with no net below, and he never figures out why. Neither do the viewers who observe him. Outside of a general queasy feel, what’s on screen accomplishes nothing. Or at least nothing new.