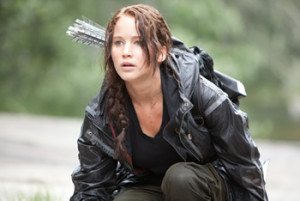 There are legions of fans of Suzanne Collins’ “The Hunger Games” novels and this new screen adaptation is eagerly awaited. It’s not likely that the series will see the success of the “Harry Potter” or “Twilight” franchises, but it has the potential.

There are 12 districts in post-apocalypse North America. A fascist-like regime runs the show, and a show it is. The evil leader (Donald Sutherland) forces a teenage boy and girl from each of the districts to compete in the kill or be killed “Hunger Games,” which are set over 24 hours in a forest. The Games are televised to a weary and shocked nation that has no choice but to watch and be humbled and intimidated.

Sixteen-year-old Katniss Everdeen (Jennifer Lawrence, Oscar-nominated actress for Winter’s Bone) volunteers for the games to spare her younger sister. She is paired with a local boy Peetah (Josh Hutcherson). The two are taken to the capitol city of the nation of Panem, where the rich and privileged live, dressed like cartoonish characters. They teens are chaperoned and mentored by adults: Effie (Elizabeth Banks) who chooses the participants called “Tributes;” Cinna (Lenny Kravitz) a stylist; and Haymitch Abernathy (Woody Harrelson) a mentor.

They are let loose in a forest with weapons and guile. Kill. Murder. Die. Survive. Only the winner escapes.

The images in the film are repulsive and disturbing. But that’s the point. Through the series of books, the civilians must find a way to regain their land, government and integrity. It’s a noble thought, one that is hard to keep in mind as you watch teenage actors slice and dice opponents that are as young as 12. The film appeals to the worst in humans, it’s like tuning into an episode of “Survivor” and being aghast that the participants are children, going for the jugular. As the Abernathy character explains it, “Embrace the probability of your imminent death.”

The first third of the movie is a long drawn out and boring set up for the games. The staging is sloppy; the camerawork obtrusive and clunky, the film does not gel. When the games start, and there are 24 hours to glory or death, the pace picks up somewhat. But the combat, chase and escapes scenes aren’t moment-to-moment, they are sparse, making the film’s 142 minute length seem belabored.

The target audience of teens and adolescents may get bored from the lack of thrills. The better “Harry Potter” and the “Twilight” chapters eventually mastered pacing and editing. When those films where too stagey, they were tedious. When the tricks, fights and thrills were measured and choreographed, you almost didn’t notice if the storyline was too complex or that the characters too emotional.

Filmmaker Gary Ross, whose previous credits include the dour satire “Pleasantville” and the sports movie “Seabiscuit,” was the wrong director for this adolescent sci-fi/action/thriller. Cinematographer Tom Stern (“Changeling,” “J. Edgar”) was the wrong cameraman – he has great trouble framing the shots and shooting sequences that have a lot of motion.

Ross, the novelist Suzanne Collins and co-writer Billy Ray had a tough task, assimilating so much background information into the first chapter of a complex series. If you’ve read the books, the film might make sense. If you haven’t, it might not. What you will see, instead of a well-intentioned ode to anti-fascism, is teens murdering teens. In light of today’s all too rampant school killing sprees, there is a heightened sensitivity to the subject. Should impressionable teenagers watch this kind of film? It’s worth a conversation. Reading the novel is one thing; graphic depiction is another.

The one right, pitch-perfect element in this film is the performance by Jennifer Lawrence, which is as brave and unfaltering as that of the lead character. She looks like a normal young woman. She shoots a bow and arrow like an Olympic archer. Her character is unwavering in her determination to remain human within the most inhumane circumstances. Her performance and the lead character almost make up for watching a 12-year old girl take a spear through the heart and die. But not quite.