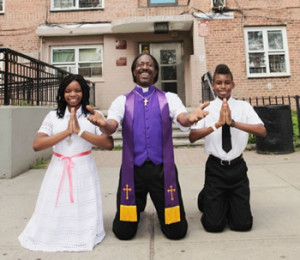 There is a nostalgia regarding some Spike Lee movies: “She’s Gotta Have It,” “Do the Right Thing,” “Clockers…” Back in the day the director gave glimpses of urban New York life that captured a certain demographic and defined and set pop culture. Remember those days fondly, you’ll need to as this misguided endeavor goes off the deep end…

Flik Royale (Jules Brown) is a precocious, middle-class, 12-year-old, iPad-toting nerd from Atlanta. His mom drops him off (dumps him) at the projects in Red Hook Brooklyn, where he will spend the summer with his grandfather, Bishop Enoch Rouse (Clark Peters). Granddad is estranged from his daughter, and he and his grandson get off to a rocky start. Call it a clash of cultures and generations.

Enoch worships the white Jesus and is a heretic to the thugs in the projects, though a savior at his church. Flik feels completely alienated until he meets Chazz (Toni Lysaith), the daughter of one of the Rev’s churchgoers. The two kids strike up a relationship as Flik tries to negotiate the peculiarities of living in a lower income urban environment. (Hey young brother, you can start by not flaunting the iPad in front of the neighborhood bad boys!)

Not a bad set up: two diametrically opposed characters learning life lessons from each other. Minutes into the film, the script, direction and most of the performances go haywire. The storyline’s challenges, rivalries and revelations are ho-hum, preposterous or outright stupid: e.g. when an accuser confronts Enoch in his church over a past transgression. This idiotic reveal is a perfect example of poor screenwriting. There is no set up for the debacle. None. And, it leads to a dull-thud ending. The dialogue is filled with words that look good on the page, but don’t feel right coming out of real people’s mouths. And be prepared to hear the “N” world endlessly along with racist, homophobic and anti-Semitic comments. It’s enough to turn even a bigot’s stomach.

The direction is aimless at best and changes tones with the weather. Comedy? Drama? Melodrama? Music video? For Pete’s sake, pick a vision and stick with it! The filmmaking in this movie makes Tyler Perry look like an art-house auteur. Even Perry’s worst movies have a stable tone and are usually uplifting.

The young actors burdened with the task of bringing the characters Flik and Chazz to life are encumbered by the starch stiff dialogue. It’s rare that child actors have a clue about what they’re doing. The mark of good direction is that it pulls natural performances out of young cast members and nurtures them, seamlessly, unobtrusively. These kids are painfully aware they are on camera; there isn’t one moment in the film in which they seem connected to the script, the dialogue or each other.

Normally musical soundtracks caress or enhance a movie. The music in this film is too loud; it interferes with the process. The cinematography looks like it should be on MTV, not in a movie. The costumes in the Red Hook projects are color coordinated like a Gap ad. There isn’t one natural looking piece of clothing in the entire film.

In a few instances, the film finds its stride. When Flik and his mom Skype each other and have personal conversations it’s endearing. When Enoch proselytizes in his church and whips the congregation into a frenzy, the moments seem so real. Credit Clark Peters, the only seasoned, instinctive actor in the movie, with rising above the fray.

Watching this film for 137 minutes is like being stuck in an elevator with a mean-mouthed, bigoted, cynical bore who has nothing good to say about life and is determined to make you listen. Think back kindly on “She’s Gotta Have It,” Do the Right Thing,” and “Clockers.” You’re gonna need to…