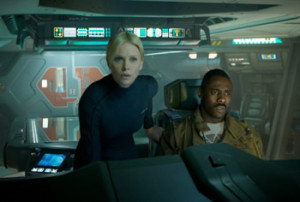 Back in 1979, the ground breaking movie “Alien,” as directed by Ridley Scott, coined a new genre hybrid; sci-fi space horror. Decades later, that franchise abated and a prequel was planned and abandoned. A new stand-alone film emerged, with vestiges of alien-ish elements, dubbed “Prometheus.” In its glory, and with some imperfections, this new visceral ode to the “meaning of life” underlines Scott’s artistic genius once again.

Janek guides the craft to a distant, barren, brown-earth planet, where odd sightings, large domes and a suspicious-looking straight road come into view. As one excited crewmember puts it, “God doesn’t make things in straight lines.” A contingent explores the planet, not knowing what to expect, but hoping to discover traces of life. They find more than they bargained for in a catacomb filled with cylinders, carvings and evil apparitions.

With poise and great artistry, Scott crafts a world that combines high-tech science, primal beginnings, human frailty and sheer horror. The visuals, with supreme aid by cinematographer Dariusz Wolski (“Pirates of the Caribbean” series) and countless art directors, are jaw-droppingly beautiful. From three-dimensional holograph charts on the spacecraft, to the haunting tunnels in the catacomb, to haunting, porcelain white extraterrestrials, this is pure eye candy. The colors, textures and shapes are magnificent. The flaw in Scott’s direction is in his pacing and the absence of any engaging action scenes until the film hits the 50-minute mark. Sci-fi geeks won’t care. Others will have their patience tested. And oh, the serpent-looking looking alien creatures, they’re ho-hum.

The script by Jon Spaihts and Damon Lindelof is fairly refreshing as it steers away from the “Alien” allegory and more towards imperfect wretches looking for the essence of mankind. Still, what you miss from the old franchise is a take-charge fighter, ala Ripley (Sigourney Weaver), a decisive leader willing and able to battle the unknown. Most of the crew in this epic react to stimuli and don’t create any. The exception is the droid David, who is on a sneaky mission and lacks a conscience. He may be the only, truly compelling character in the film, and he is unsympathetic though deliciously devious.

Fassbender, arguably today’s most chameleon-like actor, finds the nuances in his robotic persona and plays him cool and cunning. Theron, who in trailers seems like she might play the central character, is a sideshow-an evil capitalist. Elba gives the cast a human side, a normal, everyman both congenial and brave. Guy Pearce has a short part as the corporate elder. The supporting cast is strong but not stellar. Noomi Rapace was far more engaging in “The Girl With the Dragon Tattoo.” That character had depth. Rapace’s Elizabeth Shaw has a few edgy moments, especially during a grisly birthing scene, but again she reacts to things and doesn’t set a course, which is the preferable rout for a protagonist.

There is room for another “Prometheus.” Without giving away specifics about the ending, there is room for Scott to make his vision even better. Or for a more action-oriented director like James Cameron, who directed the sequel “Aliens,” to take this venture to its next level. This is a work of artistic sci-fi genius. But it is not perfect.