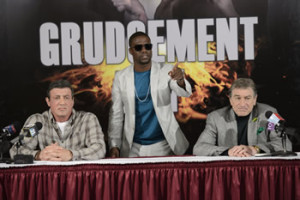 This is a charming and disarming geezer sports movie. Somewhat formulaic, but a lot of fun regardless. In fact, you may get so caught up in the moment you’ll celebrate your gray and throw your Grecian Formula away.

The genesis of this AARPish story came from screenwriter Tim Kelleher (The Arsenio Hall Show and Two and a Half Men), who contemplated an abandoned, 1999 heavyweight rematch between the 50-year-old Larry Holmes and George Foreman. He added 10 or so years to his main characters’ ages, and things took off. Then director Peter Segal (Get Smart) enlisted two noted actors who’ve portrayed cinema’s most iconic boxing protagonists: Robert DeNiro (Jake LaMotta in Raging Bull) and Sylvester Stallone (Rocky Balboa in theRocky series). It’s a recipe for comic/drama success.

Light heavy weight Pittsburg boxers Billy “The Kid” McDonnen (DeNiro) and Henry “Razor” Sharp (Stallone) have nursed a grudge for 30 years, ever since Razor ditched a decisive third match back in 1983 which would have determined who was the better boxer. Both had won one match apiece; the third would have given one of them bragging rights.

Three decades later, The Kid, a car dealer, has won and lost fortunes and the washed-up, behind-on-his-bills Razor works in a plant. Their old boxing promoter Dante Slate, who made Don King look like an angel, has since died but his fiery, diminutive son Dante Jr. (Kevin Hart, BET’s Real Husbands of Hollywood) is determined to get the guys back in the ring. A video of the two pugilists trading barbs and jabs goes viral, and the next thing you know, it’s on. “Grudgement Day” takes on a life of its own.

Lots of movies start out with intriguing premises and good intentions, but few turn into engaging entertainment. This one does. The producers (Bill GerberGran Torino, Mark Steven Johnson Grumpy Old Men, and others) get a lot of the ingredients (cast and crew) right. Tim Kelleher and Rodney Rothman’s script provides a solid, not stupendous, foundation. It’s filled with formulaic and sitcomish plot devices (the boxers are at odds in a love triangle anchored by an old flame named Sally Rose, played by Kim Bassinger, and The Kid eats pancakes for breakfast washed down with Scotch on the rocks.) But their punchy dialogue, which often seems improvised, is sharp (“The world is laughing but you’re not dead!”) or hysterically funny (Dante to an octogenarian trainer played by Alan Arkin, “I choose to believe you called me Webster because of my dictionary-sized vocabulary, not because of my height and race.” “No,” says Arkin, “It’s because you’re short and black.” Dante, “What was Jesus like? I’m Curious. Was he cool?”). And, scenes are blessedly short and the pacing is perfect (editor William Kerr, Bridesmaids).

The film works largely because the cast is fun to watch. Apparently Kevin Hart’s popular BET parody of Hollywood spouse reality shows is doing wonders for his timing and he is finding his rhythm as a comic actor. He twitches, cocks his head, storms around the sets and gets in everybody’s face, adlibbing like a champ. It almost doesn’t matter what he says, his demeanor is so damn funny he could deliver an eviction notice and be completely hilarious. Bassinger, as the sensual Sally Rose, is still a tall glass of water at age 60. Arkin can wheel off a funny line without working up a sweat, and he’s nearly 80!

Stallone and DeNiro have so much history—cinematically and with filmgoers—they’re like watching aging uncles. They step into the ring like feisty old roosters fighting over a hen. They’ve got chicken legs, gullets under their chins, lines around the eyes, lumpy breasts. But make no mistake about it, these are two tough old birds who run around the ring like teenagers, do chin-ups like athletes and throw punches like missiles. They’re virile, boastful, tender and amiable. The Kid and Razor are almost as old as Santa, but they’re forever young.

Stay until after the final credits roll for two unbilled cameo appearances that are laugh-out-loud funny. It’s a TKO.