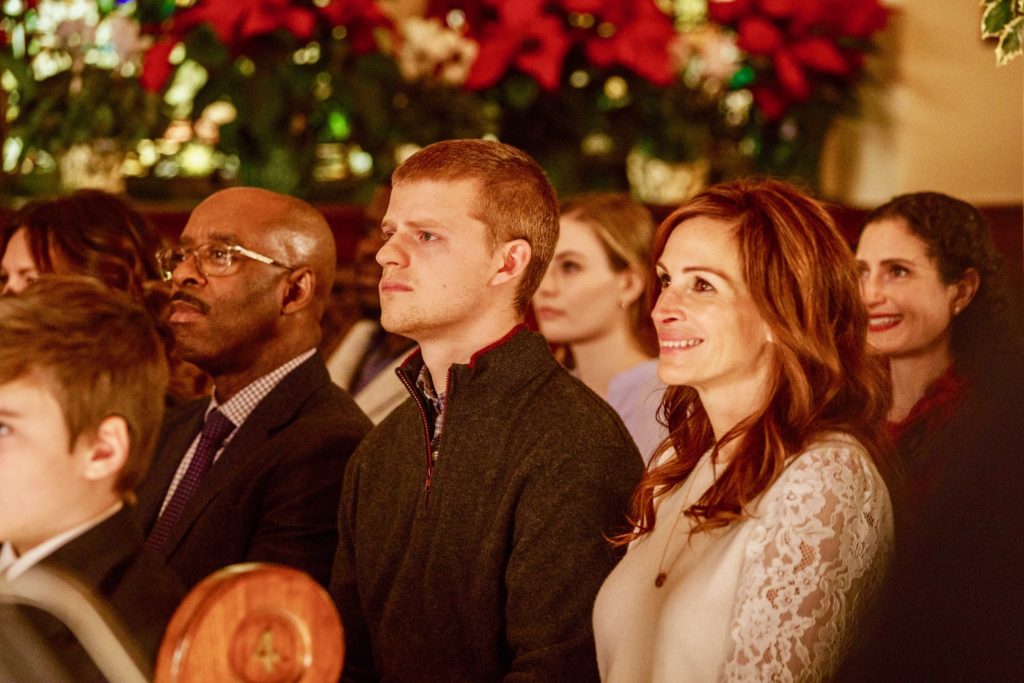 Courtney Vance, Lucas Hedges and Julia Roberts co-star in Ben Is Back

No matter how you slice it, a problem once relegated to the inner city is now all of America’s crisis. From a homeless person living under a bridge in New York City, to a kid OD’ing in a wealthy, bedroom community, drugs are killing people and making families implode. The latter is the central focus of the very striking and heart-wrenching drama/thriller Ben Is Back.

Another film released earlier this year, Beautiful Boy, attempted to tell a similar tale of a middle-class parent/child battle against drug addiction. It starred Timothée  Chalamet and Steve Carell, was set in idyllic Northern California and had a feeble, superficial, way-too-Hollywood approach.

Peter Hedges, this film’s writer (About a Boy, What’s Eating Gilbert Grape) and director (Pieces of April), manages to avoid BB’s pitfalls. From the first frame, he takes on drug addiction’s evil swath and tells a very raw and encompassing truth. As a family drama, Ben is Back hits a nerve. As it segues into a crime/thriller, the surprisingly smooth transition adds another unexpected level of engagement. It’s like he’s upping the ante right up to the final credits.

Hedges smartly chose Julia Roberts as his muse. The Oscar-winning star of Erin Brockovich has a knack for getting audiences to side with her characters. Never pretentious or narcissistic and always conceptually down-to-earth. She’s the perfect person to play Holly Burns, a mom who‘s trying to get on with her life. She’s living with her new well-to-do husband Neal Beeby (Courtney B. Vance) and their two small biracial children (Mia Fowler and Jakari Fraser) in tony Westchester County, NY. Neal, with his big heart, has welcomed Holly’s teenager daughter Ivy (Kathryn Newton,Lady Bird), from a previous marriage, into their clan.

All seems well on the morning of Christmas Eve. Expectations run high for a joyous, Martha Stewart-ish holiday, with picture-perfect decorations, neatly wrapped presents under the tree and the purest white snow on the ground. Santa is expected, but he is not the one standing outside the front door when mom comes home. Holly’s face blanches when she spies her 19-year-old son Ben (Lucas Hedges, Manchester by the Sea). He’s supposed to be in rehab and working on a substance abuse problem that has turned him into a lying, conniving and piteous droid. What’s he doing standing there?  What does this mean? How will her sob-story exhausted family react? Ben says, “You’re all still scared of me, which is the last thing I wanted you to feel.” Sure.

For the next 103 minutes, 24 hours in the life of the Burns/Beeby household, the audience goes on a roller coaster ride, without a seat belt, with tremendous highs and the deepest lows. You can never trust Ben’s motives. You never doubt Holly’s determination to help him. She deals with doubt and wariness as she puts her boy on a strict, periodic regimen of drug tests. She never, if rarely, lets him out of her sight. But as anyone who has dealt with the problem will confide, there are never enough hands and eyes to stop an addict from self-destruction.

Peter Hedges gritty interpretation of this middle-class family in crisis is reminiscent of Kenneth Lonergan’s Manchester by the Sea. Well-drawn characters. A very rich, dense plot. Deep feelings and family strife. Despair. Hope. And then more despair. His masterful, understated direction gives the actors room to create portrayals that standout. It’s like you were invited to their home for Christmas dinner, and even with you sitting there they still can’t get a grip. As Holly’s lofty mission turns into a nightmare that lasts from dusk ‘til dawn, none of what she encounters, especially on the seedy side of town, should be the norm for a wholesome suburb.  It’s unreal, but in other ways it’s not.

Credit a perfectly written script for the distinct personalities, subplots and twists that hold attention until there is a resolution. There are plenty of situations and poignant dialogue that will leave you gasping: Holly to a doctor who got her son addicted: “I hope you die a terrible death.” In a reality check for her deceitful son: “Just tell me where you want me to bury you.” One of the most telling and shocking sequences is when Holly and Ben are driving around town and he can point to different idyllic looking houses where he has bought or done drugs.

Roberts is in her glory. Tough and brash. Truthful when no one else can be, and lying when she must.  Vance as the patient stepdad has a pivotal role and executes well. It’s also encouraging to see him cast in a part that might not have gone to an African American actor. The interracial dynamic adds texture and depth to the proceedings. As do the biracial children and the fact that a black man is the sober, moneyed breadwinner and a white teenager is the one in trouble. In only a few intense moments a wiry, immoral addict named Spider steals scenes. He’s played by David Zaldivar, and in just seconds his kinetic persona whips in and out of the night like a rat who stole cheese.

The perfect counterbalance to Roberts’ blunt portrayal of Holly is Lucas Hedges’ manipulative and  duplicitous interpretation of Ben. He pulls you into a dark world where vermin surround him, and you get as sullied as he does. He makes Ben’s fight to stay sober gripping. He makes it clear that the son and his mother are battling a demon that knows how to win. Ben: “It’s not for the high anymore. I just don’t want to be sick.”

Richard Pryor once said, regarding drugs, “They call it an epidemic now. That means white folks are doing it.” A headline for an article in The Guardian Newspaper reads, “Amid the opioid epidemic, white means victim, black means addict.”

Ben Is Back pulls the curtains aside on a suburban home and lets viewers get a candid look at the destruction and chaos drug addiction can bring to anybody’s family.