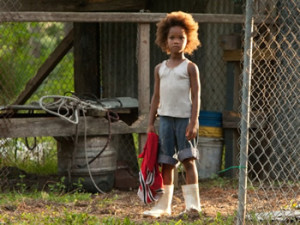 First time director Benh Zeitlin, a New Orleans resident, has masterfully taken the stage play “Juicy and Delicious” and crafted it into an alternative universe. This Katrina-like drama is set in the Bayou, in an area dubbed “The Bathtub,” where a father and daughter live a vagrant’s life, in a tattered community, a world all their own.

Six-year-old Hushpuppy (Quvenzhané Wallis) lives in squalor, in her own hut. Her dad Wink (Dwight Henry) insists they live apart. Yet everyday they meet for dinner, when he kills a chicken and roasts its feet, bill and all. Hushpuppy is the picture of innocence and curiosity. She mixes stark reality and fantasy effortlessly: prehistoric creatures called aurochs follow her like sheep. Wink is the exact opposite, sullen, angry a worrier. If you looked paranoid schizophrenic up in the dictionary, you’d see his picture. Their relationship is touchy, fragile, and combustible. They are equally stubborn, equally defiant. Fire, rain and a terminal illness deluge them.

This is a character study, versus a plotline with events that pull momentum along. Once you get a feel for the environment, the sheer desperation and Hushpuppy’s indomitable spirit, the non-traditional format becomes less and less off-putting. As this tale weaves its magic, it will lead you into a parallel world that is as foreign as living on another planet, but still so close to home.

Hushpuppy’s voiceovers’ and the dialogue in general are poetic, thoughtful and enigmatic (Lucy Alibar and Zeitlin co-screenwriters): After the storm, “When the water goes down I’m going to French kiss the dirt.” Regarding those who drowned in the flood, “They’re all down below trying to breathe through the water.” A homage to the brave souls who persevere: “Everybody loses the thing that made them. Brave men stay and watch it happen. They don’t run.”

There are evocative images throughout (Ben Richardson cinematographer; Dawn Masi art director): Glaciers melting into icy water. The back of a pick-up truck as a floating arc. The aurochs pounding the earth. The sound effects are astounding (Steve Boeddeker sound designer): The onslaught of a storm is ominous and thunderous when rain reverberates on their hut’s roof sounding like heavy meat cleavers falling on a tin.

Dwight Henry plays Wink as a disturbed man who bullies his child in an effort to toughen her up and hone her survival instincts. His rage is unmistakable. It’s the anger and fear people experience as they face death. Hands down, Quvenzhané Wallis turns in the best female performance of the year. No adult has approached the raw edge she wears like a warrior. Her portrayal is primal; it whisks you away.

Benh Zeitlin’s directing debut is an auspicious and ambitious feat. He is an artist, a storyteller, the town crier. He has given us one of the most provocative, personal and engaging interpretations of what it’s like to live in abject poverty and emerge with dignity. It’s an amazing vision. A work of art.